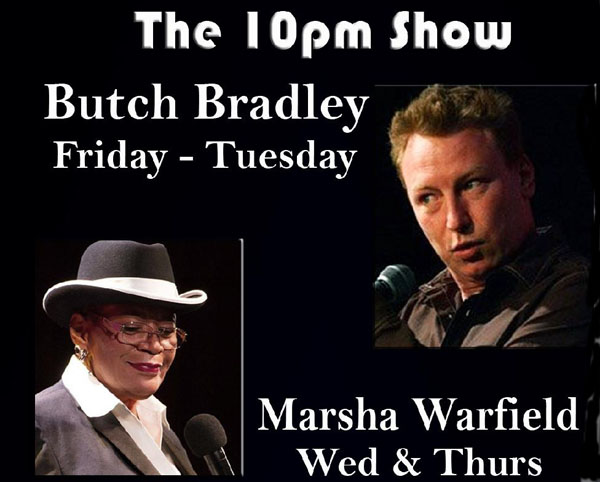 Coupon Specifics: Present this 10 PM Show coupon or show it on your mobile device at the Strat Hotel box office to receive 50% off each ticket purchased. 21+ only. Coupon promo code: V4L50

“You’ll laugh, you’ll cry, you might even mess yourself.” – Vegas4Locals.com

When you just need to laugh your ass off there’s no better place to do it than at The 10 PM Show! Brought to you by L.A. Comedy Club, the show features 2 hilarious rotating headliners who will not disappoint!

Performing Fridays through Tuesdays, Butch Bradley is one of the most popular stand-up comics on today’s comedy circuit. A veteran of The Laugh Factory, The Improv, The Comedy Store, The Tropicana Comedy Stop, The Comedy Connection, and Comic Strip NYC, Butch’s extensive experience has earned him opening spots for comics such as Ray Romano, Lewis Black, and Cathy Ladman. Butch was also a featured comic at the 2001 Comedy Arts Festival in Aspen, Colorado.

Comedian and actress Marsha Warfield is best known for her role as Roz Russell on “Night Court”, the Homeroom Teacher in “Mask” and her roles in “Caddyshack 11” and “Empty Nest”. Her stand up comedy leaves audiences crying with laughter!