An event every week that begins at 8:00 pm on Wednesday, Friday and Saturday, repeating until March 14, 2020 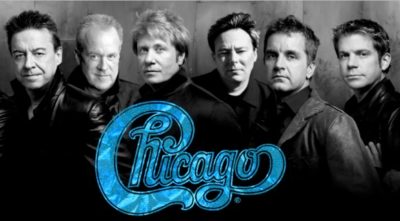 Don’t miss your chance to catch this iconic band when they stop in town for this concert event.

CHICAGO DESCRIPTION
With more than 50 years of performing under their belt and a string of 26 consecutive hit albums, Chicago is one of the most successful rock bands of all time. They put out some of the most recognized songs of the ’70s and ’80s including their early hits “25 or 6 to 4” (1970) and “Saturday in the Park” (1972). In fact, the band probably shipped more vinyl than any other American rock group during those decades.

The group has amassed more than $122 million in record sales and numerous awards. Some of their accolades include a Grammy Award, multiple American Music Awards, a star on the Hollywood Walk of Fame, a Chicago street dedicated in their honor, and keys to and proclamations from an impressive list of U.S. cities. Chicago is second only to the Beach Boys in terms of Billboard singles and album chart success among American bands.

The group appeared on the finale of the ninth season of “American Idol” in 2010. Their Christmas album “Chicago XXXIII: O Christmas Tree” was released in October 2011. Later that year, the two-disc set “Chicago XXXIV: Live in ’75” — and their 34th album overall — was released. Chicago spent most of 2012 on a joint tour with the Doobie Brothers and has continued to rock venues across the nation since.

Don’t miss your chance to catch this iconic band when they stop in town for this concert event.