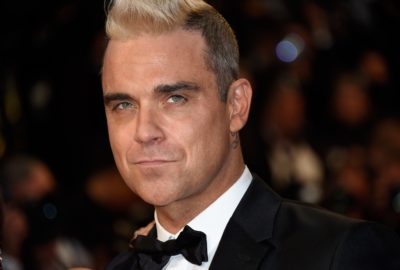 Hear the soulful sounds of singer Robbie Williams at the Encore Theater in Wynn Las Vegas.

Williams is known for his velvety pop-rock voice. He started with boy band pop group Take That, who’s song “Back for Good” soared onto the US charts in 1995. The smash-hit reached No. 7 in the US, but in many countries, including UK, Germany and Norway, it reached No. 1.

Williams started his solo career in 1995 and for the past 25 years, has been entertaining crowds with his rebel persona and songs like “Millennium,” his 1998 hit where Williams imitated a James Bond-type character in a tuxedo, classic sports car and rotating circular bed–how very classic Vegas (we knew we liked this guy)! Other hits include “Rock DJ,” “Kids,” “Candy” and “Somethin’ Stupid,” the classic Sinatra song, sung by Williams with Actress Nicole Kidman.

Williams has also been included in a number of soundtracks, including recordings such as Queen’s “We Are the Champions” for 2001’s “A Knight’s Tale” and Bobby Darin’s “Beyond the Sea” for the “Finding Nemo” soundtrack. Williams has also taken to the big screen several times, including performing in the biographical film “De-Lovely,” about the life of composer Cole Porter.

Williams will no doubt entertain guests with his wit and humor along with his soulful voice.