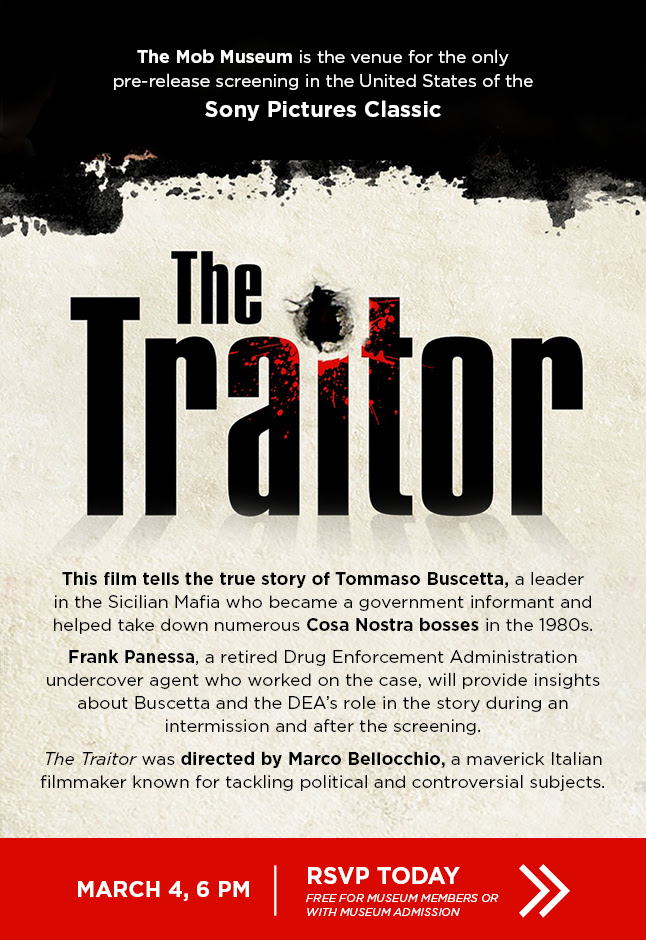 THE TRAITOR SCREENING AND DISCUSSION

Organized crime stories are not the exclusive province of American filmmakers. A new Italian movie, The Traitor, tells the true story of Tommaso Buscetta, a leader in the Sicilian Mafia who became a government informant and helped take down numerous Cosa Nostra bosses in the 1980s.

The Mob Museum screening will be Sony Pictures Classics’ only pre-release screening of The Traitor in the United States. Frank Panessa, a retired Drug Enforcement Administration undercover agent who worked on the case, will provide insights about Buscetta and the DEA’s role in the story during an intermission and after the screening.

Buscetta took the rare step of speaking out against his Mafia brethren after two of his sons were killed, followed by the deaths of his brother, son-in-law and four nephews. He believed the leaders of the Sicilian Mafia were no longer upholding the secret society’s values. He told authorities intimate details of how the criminal organization operated. In 1984, he was extradited to the United States and entered the Witness Protection Program. A year later, he testified against the American Mafia in the Pizza Connection trial in New York. Then he testified at the so-called Maxi Trial in Palermo that led to the convictions of 338 members of the Sicilian Mafia, including 19 bosses who received life sentences.

The film stars Pierfrancesco Favino as Tommaso Buscetta; Maria Fernanda Candido as his wife, Cristina; Nicola Cali as Mafia boss Toto Riina; and Fausto Russo Alesi as Judge Giovanni Falcone, to whom Buscetta revealed the Mafia’s secrets. Favino was named Best Actor for his work in The Traitor at the 2019 European Film Awards. He also has appeared in several American-made films, including Angels & Demons (2009) and World War Z (2013).

The Traitor was directed by Marco Bellocchio, a maverick Italian filmmaker known for tackling political and controversial subjects.

The 2 hours, 35 minutes movie is in Italian and will have English subtitles.