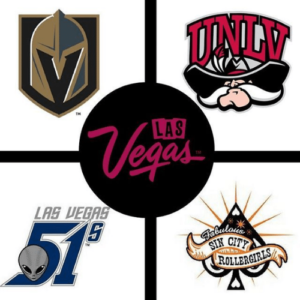 Las Vegas is home to various sports teams, from amateur and collegiate squads to professional league franchises. Homebase to the NFL’s Las Vegas Raiders, the NHL’s Vegas Golden Knights, the WNBA’s Las Vegas Aces, and the USL’s Las Vegas Lights FC, our Valley attracts sports fans from all over who travel to Las Vegas to root for their home town heroes. Whomever you root for, Las Vegas welcomes you to our city to enjoy all the sporting action you can handle!

The Las Vegas Aces are a professional women’s basketball team based in Paradise, Nevada, playing in the Western Conference in the Women’s National Basketball Association (WNBA). The Aces play their games at Michelob Ultra Arena at Mandalay Bay. The team is owned by Mark Davis, who also owns the Las Vegas Raiders.

The Las Vegas Aviators are a Minor League Baseball team of the Pacific Coast League and the Triple-A baseball team for the Oakland Athletics.

Las Vegas Lights FC is an American United Soccer League professional soccer team based in Nevada. In 2021 the Lights established an affiliation partnership with Los Angeles FC (LAFC) of Major League soccer. The team plays its home games at Cashman Field and is owned by Brett Lashbrook, who also serves as general manager.

The Las Vegas Raiders are a professional American football team based in the Las Vegas metropolitan area. The Raiders compete in the National Football League (NFL) as a member club of the League’s American Football Conference (AFC) West division. The Raiders play their home games at Allegiant Stadium in Paradise, Nevada, headquartered in Henderson, Nevada. Mark Davis owns the team.

The Vegas Golden Knights are a professional ice hockey team based in the Las Vegas metropolitan area. The group is a member of the Pacific Division of the Western Conference of the National Hockey League (NHL). The team’s home ice is at the T-Mobile Arena on the Las Vegas Strip.

To say that the Vegas Night Hawks fly under many football fans’ radar would be an understatement. But we do have excellent, climate-controlled indoor arena football in Las Vegas! Well, Henderson. Playing in the Western Conference of the League, Head Coach Mike Davis’ teams’ games are played at the newly constructed Dollar Loan Center, located near the District at Green Valley Ranch, right off S. Green Valley Parkway.