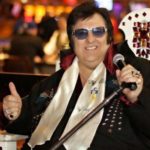 A fan favorite, award-winning Las Vegas entertainer Pete Vallee stars as Big Elvis in this classic Las Vegas tribute show. Watch as he performs all the hits, plus other popular tunes spanning six decades. Big Elvis is one of the best free Las Vegas shows on the Strip!

Pete began singing as a teenager in his local church, where he was first told that he sounded like a young Elvis Presley. He soon learned to play the guitar and put together an act he previewed at a school talent contest. To this day, he’ll never forget the unbelievable response he received from a packed audience of students and parents when he sang “Jailhouse Rock.” From that point on, Pete wanted to be an entertainer, and he began to model a career after his mentor, the King of Rock.

This clean-cut, good-natured man with a voice that sounds like Elvis respects the King in every way. A collector of Elvis memorabilia, Pete admires the man he pays tribute to each day and tries to stay true to the King’s persona as a performer who loved and was loved by his fans and who maintained a sense of loyalty to them.

A recipient of multiple Best of Las Vegas honors, Pete’s Big Elvis Show is the longest-running Elvis Presley tribute show in Las Vegas. Pete has attracted an international following of fans and continues to pack the house for each of his 9 shows per week. When Pete sings, his fans come alive, and the party begins. Pete’s repertoire consists of over 900 songs, including an abundance of Elvis music, well-known hits, and obscure movie tunes, plus music from other performers of that era, Gospel, Country (old and new), and Rock ‘n Roll favorites.