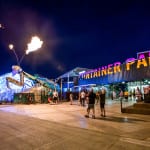 Greeting visitors at the Downtown Container Park open-air shopping and entertainment venue entrance is a giant, metallic, female praying mantis. It sports a 4,000-watt sound system. And it shoots 6-story high flames of liquid propane from its antennae into the night sky. This is Las Vegas, after all!

* The Mantis was created by aerospace engineer Kirk Jellum and is a 150:1 scale replica of a female praying mantis he found in an open field.

* Mr. Jellum constructed and gave The Mantis to his wife Kristen for their first wedding anniversary.

* When fully extended, The Mantis is 40 feet tall and 30 feet wide. It burns approximately 50 gallons of liquid propane each day, with flames reaching six stories high!

* The Mantis has a built-in 4,000-watt surround sound system, can speak more than 20 different languages, and is operated by a team of four trained, licensed professionals.

* Every night at sundown (weather permitting), the Mantis is awakened by a drum circle celebration, the “Call to the Mantis,” where everyone is welcome to participate!

* Jellum and a team of 20 built The Mantis just outside Zion National Park in 2010. Five hundred hours of design work and more than 3,000 labor hours went into its construction.

* The Mantis actually drives! On two occasions, it drove to and appeared in the annual “Burning Man” summer festival held in the Black Rock Desert of Northern Nevada – to this day, and it is still a street-legal kinetic mobile fire art vehicle.

* This was Kirk’s first art project and was such a rewarding experience that he has since left his 15-year career as an aerospace engineer to become the renowned artist he is today.