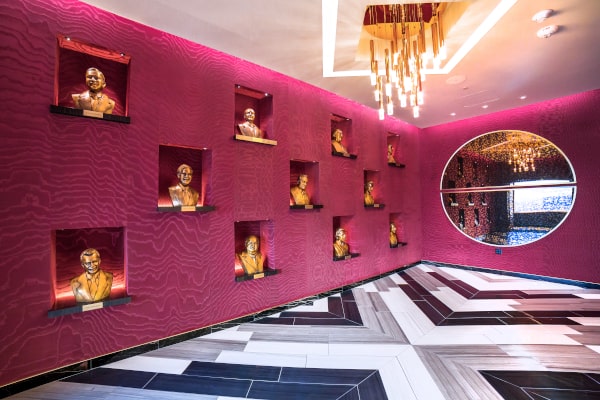 See the golden busts of the people who made Las Vegas the Gambling Capital of the World at the Circa Resort’s 60th-floor Legacy Club. Vegas history buffs can not only take in amazing views of the city built by the pioneers of this once dusty gambling town, but they can also grab a selfie with any of the 11 custom metal busts of some of Sin City’s most infamous gaming legends.

In no specific order of legendary-ness (or infamy), the collection includes Jackie Gaughan, best known for his ownership of the El Cortez; Benny Binion, who opened Binion’s Horseshoe in Downtown Las Vegas; Jay Sarno, who founded Caesars Palace and Circus Circus; Kirk Kerkorian, who opened the International Hotel in 1969, the MGM Grand Hotel in 1973, and the MGM Grand in 1993; Sam Boyd, who invested in the Sahara, became general manager and partner at The Mint in Downtown Las Vegas, opened the California in 1975, and co-founded Boyd Gaming; Steve Wynn, who opened the Golden Nugget, the Mirage, Treasure Island, the Bellagio, and Wynn Las Vegas; William Bennett, who established Circus Circus Enterprises and owned the Sahara; Bob Stupak, who opened Bob Stupak’s Vegas World; Frank Fertitta of Station Casinos fame; Barron Hilton, who ran the International and the Flamingo; and Howard Hughes, who owned the Dunes, the Sands, Frontier, Silver Slipper, Castaways, and Landmark.

Another one of the lounge’s hat tips to Vegas’ founding fathers is a showcase of black-and-white photos portraying each of them and current Mayor Carolyn Goodman and former Mayor Oscar Goodman. The lounge also features a display of 1,000 ounces of pure gold. A ticker atop the exhibit of Circa-branded gold bars shows their combined worth based on the current price of gold.