ANYONE, REGARDLESS OF RESIDENCY MAY USE THIS VEGAS4LOCALS.COM COUPON! 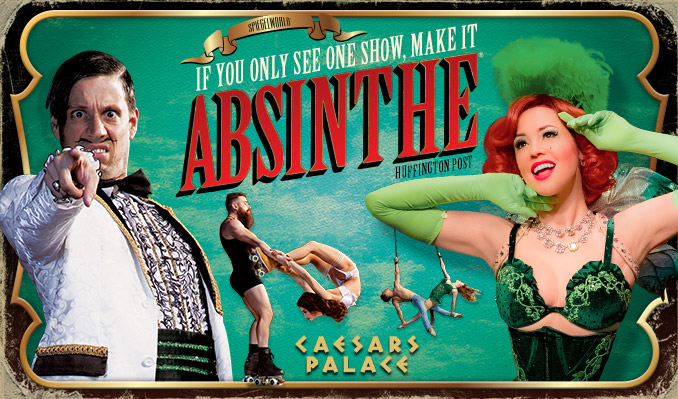 Named by Las Vegas Weekly as “the #1 greatest show in Las Vegas history”, Absinthe is the provocative but unforgettable variety show which delivers that ‘only in Vegas’ experience you came looking for.

Absinthe at Caesars Palace is a fantastical blend of carnival and spectacle, featuring wild, outlandish acts performed on an intimate, circular stage where the audience is as close to the action as you can possibly get.

Grab a drink and enter Spiegelworld’s wondrous tent, an immersive adult playground that transports you to another dimension. Not for the faint-hearted, these ridiculously talented and sexy performers from across the globe mix outrageous comedy with jaw-dropping feats of virtuosity and danger.

Hosted by the filthy rich (and just plain filthy) Gazillionaire and inspired by the absinthe-drenched cabarets of late 19th century Europe, Absinthe is an intoxicating cocktail of circus, burlesque, and vaudeville for a 21st-century audience. The New York Times said, “Imagine Cirque du Soleil as channeled through The Rocky Horror Picture Show.”

Though this racy, adults-only show is downright hilarious, it’s definitely not for timid audiences. It has all the elements of an R-rated movie, but with more glam and laughs.

Location:
The Spiegeltent at The Roman Plaza at Caesars Palace