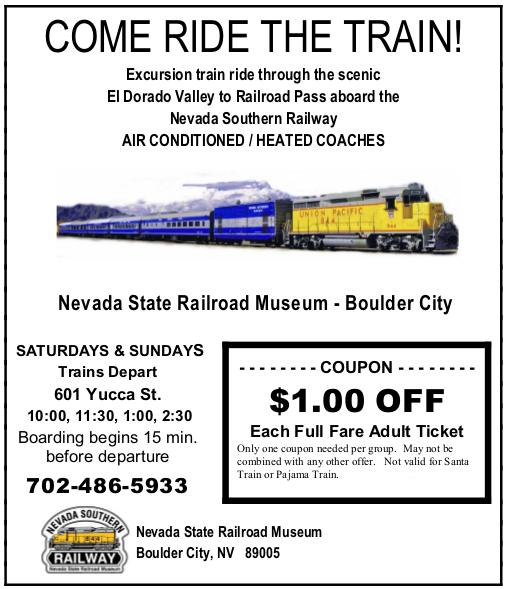 Coupon Specifics: Print and redeem this Nevada Southern Railway coupon to receive $1.00 off each full fare adult ticket purchased. Only one coupon needed per group. May not be combined with any other offer. No cash value.

About the Nevada Southern Railway:

“Step back into one of the most important periods in Southern Nevada’s fascinating history.” – Vegas4Locals.com

Come ride the Nevada Southern Railway Historical Excursion Train in historic Boulder City, Nevada – the city that built the Hoover Dam. Ride the rails and experience history dating back to the 1930’s – the time this Boulder Branch Line was constructed by the Union Pacific Railroad to service the Boulder Dam project. Ride in your choice of an open-air car, or air-conditioned/heated Pullman coaches.  And yes, we are wheelchair accessible.

The train runs on Saturdays and Sundays.

Take US-93 south toward Boulder City. After passing the traffic light at Veterans Memorial Drive, proceed 0.7 miles to Yucca Street (just past the Taco Bell). Turn left onto Yucca Street, and the train station for the Nevada Southern Railway is on your right.