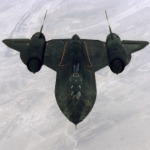 Interested in Area 51, Nevada’s famed top-secret military base? Then you can’t beat the free films playing at the Atomic Testing Museum! That’s right; there’s no admission charge to see the films. We really wouldn’t blame you though if you decided to see the museum while you’re there. It is awesome. 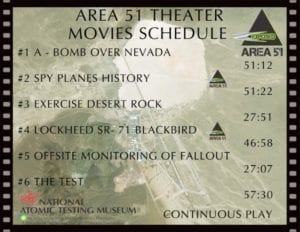 There are six films on rotation throughout the day in the museum’s theater. They include the Smithsonian-produced “A-Bombs Over Nevada,” a feature on the history of spy planes, a film with a specific focus on the Lockheed SR-71 Blackbird, a shorter film on the Desert Rock exercises, another on offsite monitoring of fall out, and a feature called “The Test.”