The Las Vegas Walk of Stars 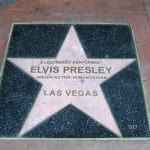 The Las Vegas Walk of Stars, located in Las Vegas, Nevada, started in October 2004 to honor the people who helped make Vegas famous.

Similar to the “Hollywood Walk of Fame®,” located along the sidewalks of Hollywood Boulevard and Vine Street in Los Angeles, California; the Las Vegas project honors people of prominence in a variety of fields including entertainment, sports, literary, humanitarian, civic, military, and pioneers.

Wayne Newton was first to be honored on October 26, 2004, followed in 2005 by Frank Marino, Liberace, Rich Little, Line Renaud, and Dick Jensen. In 2010, Frank Marino became the first entertainer to have earned induction into the Walk of Stars twice. In 2010, Cuban music icons Gloria Estefan and Emilio Estefan were the first couple recognized, who shared a star. In 2011, Mexican power couple Jenni Rivera and Esteban Loaiza were the second couple to be recognized by the Las Vegas Strip attraction. On February 17, 2008 singer, entertainer, television host and producer, Tony Sacca became the 23rd star recipient.

Each star is made of Red Indian Granite, 36″ x 36″, weighing 180 lbs., inlaid with the recipient’s name and specialty. As many as 3,000 stars could eventually be installed.

Note: The Walk of Stars is currently in the process of being relocated to The Linq Promenade. Once installed, it will reside in an area near the High Roller observation wheel. The expected completion date is currently unknown. Stay tuned!