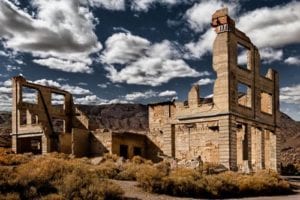 Ghost Towns near Las Vegas? You bet there are! As a matter of fact, The Silver State has more ghost towns than actual inhabited ones! From dusty old mining camps to once-thriving towns with remnants of boom times long gone, your home base in Las Vegas is the perfect starting point for numerous ghost town adventures. Here is information about some of the best ghost towns that are within driving distance of Las Vegas. So pack up the car and head out for an adventure back in time to these ghost towns near Las Vegas!

1881 Marked the beginning of one of the largest silver strikes in California history and the birth of Calico. This authentic silver mining town lives on as one of the few original mining camps of the Old West. Admission is $8.00 for adults, $5.00 for youth (6-15), and free for children 5 & under.

In 1839 gold and silver were discovered in Eldorado Canyon and almost $5 million was removed in the 40 years of operations. During its heyday, it achieved a reputation as one of the most notorious towns in the West.

Goodsprings, NV
Located 37 miles south of Las Vegas via I-15 to Jean and State Route 161.

Founded in the 1860s, Goodsprings became a large silver and lead producer in the 1890s. It is home to the Pioneer Saloon, which is reportedly home to numerous and frequent ghost sightings.

Johnnie produced more than $1 million in gold from 1904 until it was shut down at the beginning of World War II.

Mojave Desert Ghost Towns
North of I-15 between the Nevada state line and Baker, California are many former mining towns all within a short drive of Las Vegas.

Born as a tent camp for miners in 1906, Oatman was a gold-mining center. Shootouts are held along the many false-front buildings on Main Street which house shops, saloons, and restaurants. Wild burros roam the streets.

Pioche, NV
Located 175 miles northeast of Las Vegas. Take I-15 to the turnoff at US 93, turn north for 85 miles to Ash Springs, continue on US 93 east to Caliente. Pioche is about 25 miles from Caliente.

One of the most dangerous and lawless mining towns, Pioche boasts a legend that 75 men died violently before the town’s first death by natural causes. It gained further notoriety through the scandal surrounding its “Million Dollar Courthouse.”

Potosi Ghost Town
Located 25 miles southwest of Las Vegas via I-15 south to the Arden exit, US 160 West.

The site of Nevada’s oldest lode mine, with the discovery of lead deposits by Mormons from the Las Vegas Mission in 1856, the Potosi mine was a producer of lead, zinc, and silver well into the 20th century.

Rhyolite sprung up in 1905 after the discovery of gold in the area. The population rose to an estimated 10,000 to become one of the largest cities in Nevada, but by 1919 it was a ghost town.

A small milling community that sprang up in the 1890s to service the Keystone Mine in the nearby Spring Mountains.

Searchlight, NV
Located 57 miles south of Las Vegas on US 95.

This mining town began around 1879 and in 1907 was the most important community in southern Nevada. However, by 1910 depletion of high-grade ore soon reduced the population of Searchlight greatly, and those remaining made a living from ranching or catering to the highway traffic.

St. Thomas Ghost Town
Located 67 miles Northeast of Las Vegas in the Moapa Valley near Overton, off of the I-15

Founded in January 1865 by Mormon settlers sent by Brigham Young to the confluence of the Muddy and Virgin Rivers, St. Thomas had fewer than 500 residents, but was a popular stop along the Arrowhead Trail. The town and surrounding land were purchased by the Federal government in the 1930s to make way for Lake Mead. Most residents moved to nearby Overton. After the completion of Hoover Dam (then called Boulder Dam), the waters rose to cover the foundations of the town’s buildings. Today, when the lake is low, the remnants of St. Thomas are visible.