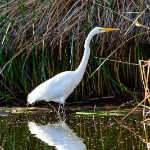 At the Henderson Bird Viewing Preserve, visitors can expect to see thousands of migratory waterfowl as well as numerous resident desert birds. Located within the Henderson Water Treatment Facility, the Preserve sits on approximately 140 paths.

During the winter and early spring, you can expect to see many duck species, such as the northern shoveler, green wing, cinnamon, and blue wing teal, pintail, bufflehead, and one of the most beautiful of all North American ducks, the wood duck. Winter is also an ideal time to see geese (Canadian, snow, and ross) and returning tundra swan.

When you visit you can expect to do a lot of walking, so be sure to wear appropriate clothing and comfortable walking shoes. Cameras and binoculars are also recommended. If you do not have binoculars, the Preserve has some available to loan you.

Directions: The preserve is located at 350 E. Galleria Dr., near the intersection of Galleria Drive and Boulder Highway (look for signs in the medians). It is located within the Water Reclamation Facility.