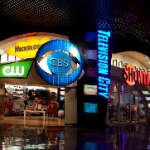 Located inside the MGM Grand Hotel-Casino, the CBS Television City Research Center gives visitors the chance to be part of the network’s decision-making by viewing and rating pilots (shows that haven’t aired yet) and other television programs they need input on.

There is no charge, and the hours of operation are from 10 am until screenings wrap for the day – usually around 8:30 pm. Screenings run around every half hour and can last up to an hour.

No reservations are needed since screenings are ongoing. Just go to the research center, located near the pool at the end of the Studio Walk, and pick up your tickets in front of the center.

Five minutes before the screening begins, viewers go to one of four studios to watch the latest offerings from CBS, MTV, Nickelodeon, and other Viacom networks. Participants are then instructed on how to use the test pads and monitors to register their opinions.

The show’s length determines the time of the testing process. A survey following the program lasts around 15 minutes.

Television City also offers incentives for helping them out. Everyone has a chance to win a home-theater system worth over $9,000 by joining Television City’s entertainment panel, which will send items for reviews – such as commercials and pilot programs – to participants’ homes.